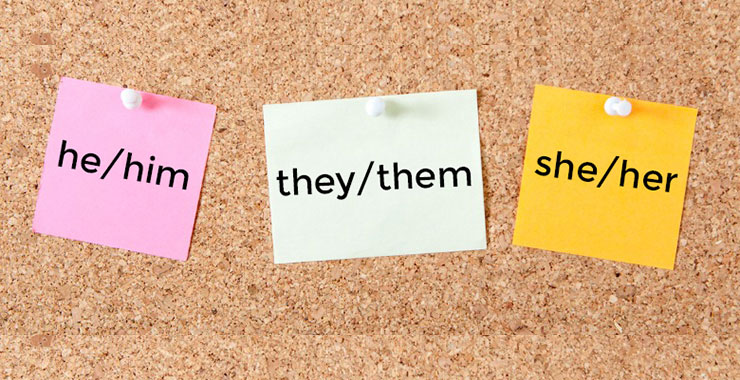 The English language is remarkably gender neutral, especially in comparison to Romance languages such as Spanish, Portuguese, French, and Italian, which all employ grammatical gender. Nonetheless, English can occasionally be quite binary, using terms like fireman, waitress, or nephew. Beyond these few gendered nouns is the issue of pronouns.

When referring to someone in the third person, it was once common to limit these pronouns to he/him/his or she/her/his, and for some time, he/him/his was said to be the default option when the referent’s gender is unknown or unspecified. Nowadays, many style guides permit the use of they/them as a neutral option, which–surprisingly to some–has a very long history of use in the English language. First, some background:

When we know a person’s gender, he and she remain the most common third person pronouns. However, this is not always the case. Consider the following sentence:

A good teacher should always listen to his students.

This sentence is not referring to a specific teacher, but to the practices of a good teacher in general. According to “traditional” grammar, his is used as a default. But why should gender be included?

In Spanish, for example, “sus estudiantes” does not denote gender. If we translate it into English, would it be correct to add a gendered pronoun and therefore add information that does not exist in the original text?

Many would argue no because the sentence could just as easily be:

A good teacher should always listen to their students.

This can also be made plural to avoid the issue entirely:

Good teachers should listen to their students.

They: a long history with new approval

The singular they has been used in English since at least the 14th century and continuously since then, according to the Oxford English Dictionary. Only in the 18th century did grammarians begin to advise against this use of the word, which is not to say that English speakers did so.

Rules and opinions about grammar change as often as grammar does: long ago, the word “you” primarily referred to multiple people, and now its use is primarily singular. For some time, prescriptive grammarians criticized addressing a single person as “you,” but we’ve long forgotten that there was any other way to do so­—or dost thou remember?

Nowadays, the singular they is permitted by The Washington Post’s stylebook, the Associated Press Stylebook, The Cambridge Guide to English Usage, and The Economist Style Guide, and The Chicago Manual of Style, even if some of these recommend working around it when possible (such as the plural example above). On the other hand, the American Psychological Association (APA Style) and the Purdue Online Writing Lab explicitly recommend the singular they as it is more gender inclusive. They was Merriam-Webster’s Word of the Year in 2019 and the American Dialect Society’s Word of the Decade.

At Southern Cone Translations, we have no problem using the singular they in our translations, as it is often the best fit to translate the grammatical gender (or lack thereof) of a phrase in another language. Like with all our translations, this is decided on a case by case basis to fit the tone, context, and audience of each text. In English, the singular they is a very natural usage that often simplifies more grammatically complex sentences, and we would be unwise to avoid it